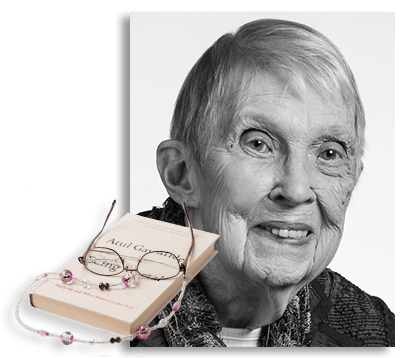 Lucretia McClure reads into each book that comes into her library

Back to Valley Manor

Step into the library at Valley Manor, and you’ll see why it’s Lucretia McClure’s pride and joy. It’s filled with more than 3,000 volumes she’s curated and catalogued herself, and features a stunning wooden boardroom table and ten leather chairs from the Kodak office of George Eastman—gifts from the Episcopal Diocese of Rochester when the new library opened in May 2017.

Talk with Mrs. McClure for even a few minutes, and you’ll understand why she’s so passionate about reading, writing and learning, and why Valley Manor’s library is named for her. Known for her colorful eyeglass chains, she’s been the resident librarian since 2012, and it’s part of her daily routine.

“I’ve been doing this so long, it’s just part of my nature,” she says. “I come down for coffee first thing in the morning, and then come to the library.” Mrs. McClure has help from fellow residents, but catalogs and does much of the shelving herself. “I’m still able to get up and go and do things. I can’t imagine doing nothing.”

True to her word, she retired at age 86 after 50 years as the Medical Librarian and Assistant Professor of Medical Bibliography with the Edward G. Miner Library at the University of Rochester Medical Center (URMC). She also served as the Special Assistant to the Director at Harvard’s Countway Library of Medicine from 1996 to 2011.

In her job with URMC, she learned about every aspect of medicine and says introducing books to the medical students was the best part of the job. She’s especially knowledgeable about the history of medicine. “I’ve always liked guiding students in their education, and helping people. The doctors and I always tried to put the best materials in front of the students.”

Mrs. McClure says “the computer is a trap.” After working 50 years in medicine, she says students don’t want to read books—they just Google and settle for the first answer they get. “But you have to read some history to truly understand medicine, or any topic. You have to persevere. Young people don’t often have the joy of reading a book like we do.”

Mrs. McClure spent just a year not working before she came to Valley Manor—which just happened to need a new librarian—and spends her days reading and researching books to determine which ones Valley Manor should buy for their collection. Everyone can request books they’d like to read, but she does due diligence in spending their limited budget. “Once you read a really good book, you can pick out the lesser books,” she says. She also writes a monthly column about books for her fellow residents.

She recently finished Joe Biden’s new memoir, and reads a lot at night. She’s in good company. Many in her large circle of friends at Valley Manor also love to read, and it’s the people who inspire her. “They’re educated, creative, interesting and supportive,” she says. “There’s so much to do here, and no end to the learning.”