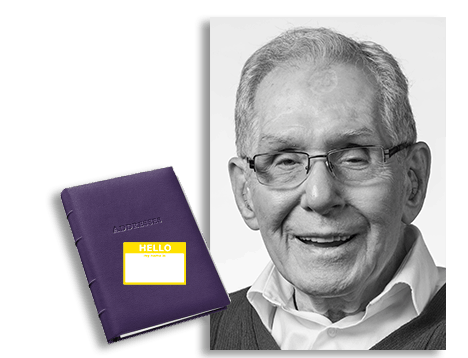 Back to Valley Manor Assisted Living

Frank Christa, a career bank manager, treats everyone like a friend

When you meet Frank Christa, you can count on him to look you in the eye, shake your hand—and remember your name. “That’s one of the first lessons you learn in banking,” says Frank. “It’s a relationship business, so you have to remember your customers’ names.”

A name that has come full circle for Frank is Valley Manor. In 1956, he joined what was originally Columbia Banking as the branch manager at 1740 East Avenue in Rochester. Many of his customers were residents of Valley Manor, long before Episcopal SeniorLife Communities acquired the property. Since the bank branch was located just down the street, quite a few Valley Manor residents relied on Frank during a long period of real upheaval in the banking industry. He worked as the branch manager during the government intervention of the Savings and Loan Crisis in the late 80s and early 90s, and continued as the manager while Columbia Banking was acquired by OnBank, then by M&T.

If residents of Valley Manor were unable to get to the M&T branch themselves, Frank would often visit them in person at Valley Manor. “It was important to me and our branch business to maintain our customer relationships, even though most bank managers didn’t make personal visits,” says Frank. “But M&T went on to do very well.”

Banking was something he enjoyed from the start. His dad was a banker, and Frank met his wife Janet at his first job with Lincoln Rochester Trust Company—she was the teller next to him. The couple married in 1954 and had three sons, David, Daniel and John. David went on to establish Christa Construction Company in Rochester, and after Frank retired from banking in 2000, he went to work for David the very next day. “I liked having a place to go each day and talking with other people,” says Frank.

But after Janet passed away in 2011, it became increasingly difficult to come home to an empty house. In 2013, Frank moved to Valley Manor and lived independently until health complications led him to move into a Valley Manor Assisted Living apartment next door. “The folks at Valley Manor helped me recognize that I needed some extra help at that point,” says Frank. “I like it here because I need it.”

Frank enjoys the cozy apartment he’s decorated with family photos at his smaller Valley Manor community. He delights in watching the progress of his sons and eight grandkids, who often call and visit. Frank likes to chat with the staff and his fellow residents throughout the day. “The staff here is excellent,” he says. He also likes to keep up with basketball and football, and is still a meticulous record keeper. Frank mentions that he had originally signed a lease at another nearby senior living community the same day he received a brochure from Valley Manor in the mail. “Fortunately, I was able to get my deposit back. I just knew I would get more at Valley Manor.”