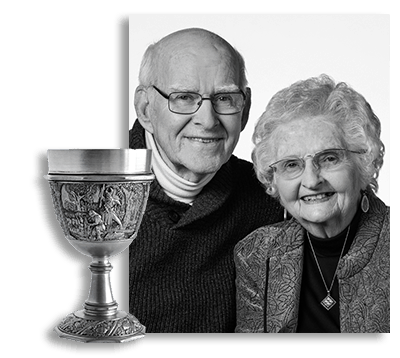 The Schaffners know that when one door closes, another one opens

Not every marriage can survive the death of a child. But Clair and Carol Schaffner managed to grow stronger and closer together in their shared faith in God when their son Scott David unexpectedly died at just 19 months old. His beautiful portrait still hangs over the couple’s bed. “Losing our son was the hardest time, and it paralyzed us for a while,” says Carol. “But life goes on. Our cup is full—it overflows!”

To look at them now, it’s obvious that they are two of the most positive, loving and grateful people you’ll ever meet. The smiles never leave their faces, and their eyes radiate kindness and warmth.

During their 63-year marriage, the Schaffners have enjoyed exceptional teaching and musical careers. They’ve also raised three daughters and welcomed their husbands, delighted in seven grandchildren and two great-granddaughters, traveled and sung in the US and Europe, volunteered at their schools and churches, and made friends everywhere they’ve lived, including Pinehurst, their new home since 2016.

The Schaffners met at Juniata College in Huntington, PA, where they earned teaching certificates and sang in the college choir. Clair served in the Air Force and toured as its choir director before the couple moved to the Finger Lakes, where they both taught school and lived on Seneca Lake. Clair went on to become a principal. After retirement, they spent almost ten years in sunny Ocala, Florida and Myrtle Beach. When both were faced with health challenges that affected their mobility and eyesight, the Schaffners decided it was time to be closer to their extended family. It wasn’t easy to downsize, they say, and it’s an adjustment to live with a lot less. But Carol emphasizes, “It’s a matter of making up your mind.”

Their next move required a search for the right spot. “We needed a place that could take us places,” says Carol, who mentions that neither of them can drive now, “but we also wanted to feel like we still had our own home.” So they looked at more than five senior living communities before their daughters Bonnie, Lori and Diane found Pinehurst. Then everything just gelled. “The people here made such a difference, and we felt at home right away,” Carol says. Clair adds, “And the price was right!”

Another factor that influenced their decision was the private entrance to their first-floor apartment. “It’s not like a motel,” says Carol. “The door makes it easier for us and the kids to come and go, and it’s lovely to look out the back.”

Now that they’ve settled in and are busy with all the learning and social activities here, the Schaffners say that Pinehurst is quickly becoming “family”—not only because their own family is close by now, but also because they’ve lost so many of their old friends. “You have to be a friend to make a friend,” says Carol. “And we’ve already made a lot of friends here.”