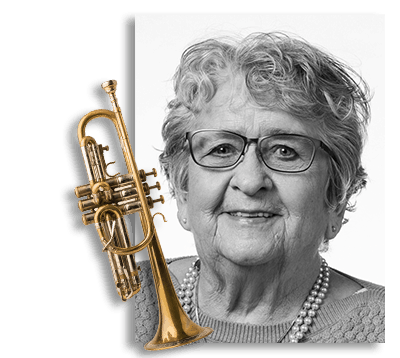 Carol Aldridge plays for the people she loves

Back to River Edge Manor

Carol Aldridge still pulls out her horn for special occasions

Music—and farming—are what drew Carol and her late husband John together. Carol was still in high school and playing trumpet in the Honeoye Falls Village Band when she and John met. “John was a tall, good-looking drink of water,” she smiles. “But he always showed up late with his tuba, because he was working on his friend’s family farm in Honeoye Falls. I lived on a farm, too, so I was a farmer’s daughter and wife for 86 years,” says Carol, who is a fifth-generation Tinker.

Together, she and John donated 65 acres of the Tinker Homestead to the Town of Henrietta for preservation in 1992.

When it came time to consider moving off the farm, River Edge Manor was the natural choice, as the couple had been long-time volunteers at The Episcopal Church Home, adjacent to River Edge Manor. “We already knew the residents and staff after volunteering so many years, and we felt it was a real plus that The Church Home and The Center for Rehabilitation were right next door,” she says. “The day we moved, our furniture was in place and our bed was already made—everything was ready.” The fact that they didn’t have to do the cleaning and cooking at their new home was a welcomed change.

“Look at this view,” says Carol Aldridge, as she sits in front of her living room window. “I’m up nice and high, at the end of the hall. And if I want to practice my trumpet, they can’t hear me next door, so I’m not bothering anyone.” One of her trumpets (she owns four, including a tiny pocket trumpet), sits on display in front of her window, and the valve trumpet was brought back for her from John when he returned from WWII. Pictures of Carol, John, and of their son, J.T., adorn the walls of her apartment.

Carol left her family’s farm to attend Madison College (now James Madison University) in Harrisonburg, VA, for a year before transferring to the Eastman School of Music, where she completed her Bachelor of Music degree. She auditioned and got the job to play first-chair trumpet for the Louisville Philharmonic, then taught instrumental music at Southern Junior High School in Louisville, Kentucky. Two years later, she returned to Rochester and the Eastman School to earn her graduate degree.

An instrumental music teacher for another 28 years in the Greece School District, Carol still remembers when she first picked up the trumpet. She was given the choice of instruments from a local music-store owner and teacher. “Choosing the trumpet…that was a lucky thing,” says Carol.

Carol, at 93 years old, has officially retired from playing during Sunday service in The Chapel of the Good Shepherd. But she still pulls out her horn for special events at The Episcopal Church Home so that she can share her music with those closest to her, people she considers family. “I’ve played the trumpet all my life,” says Carol. “It’s something I’ve always loved, like farming things and teaching. It’s just part of my personality.”